Black History Month offers a timely reminder to recognise the contribution of black people to British and global history, culture, and society, and to explore history from a view that has not always been told directly.

There’s no doubt that we should better tell the story of black history as British history, and many institutions in the higher education sector have taken action to reform their curriculums in response to debates about how history is collected and taught. Yet as the Director of an independent charity focused on tackling inequalities in higher education through robust evidence on what works, I can’t help but ask myself: is learning about history enough?

It’s perhaps equally important to look at how racial inequalities continue to impact on British society, and what can be done to change things at a systemic or institutional level. With this in mind, these are the issues I’ve been reflecting on in my role as Director of TASO this month:

When it comes to data, in some ways we are quite well served in the UK. Data on race and ethnicity has been collected since the 1991 Census, and a government website gathers together the evidence for racial inequalities in the UK, affecting such areas as education, employment, health and housing.

Interpreting those inequalities is more difficult, as studies can control for various confounding factors, but cannot clearly isolate race as the causal driver for inequalities.

Take the example of the degree awarding gap in higher education, which is particularly large for black students (21.3 points) in the UK. This is one of the most significant inequalities in UK higher education, and has wider effects, including on the number of Black academics, given the link between degree qualification and earning a PhD. One hypothesis is that prior educational attainment explains (or ‘causes’) the degree awarding gap. Yet the data shows that, regardless of whether a student achieves 3 A*s in their A levels or a BTEC qualification, black students (and indeed all minority ethnic students) are less likely to get a first or 2:1 when they graduate. 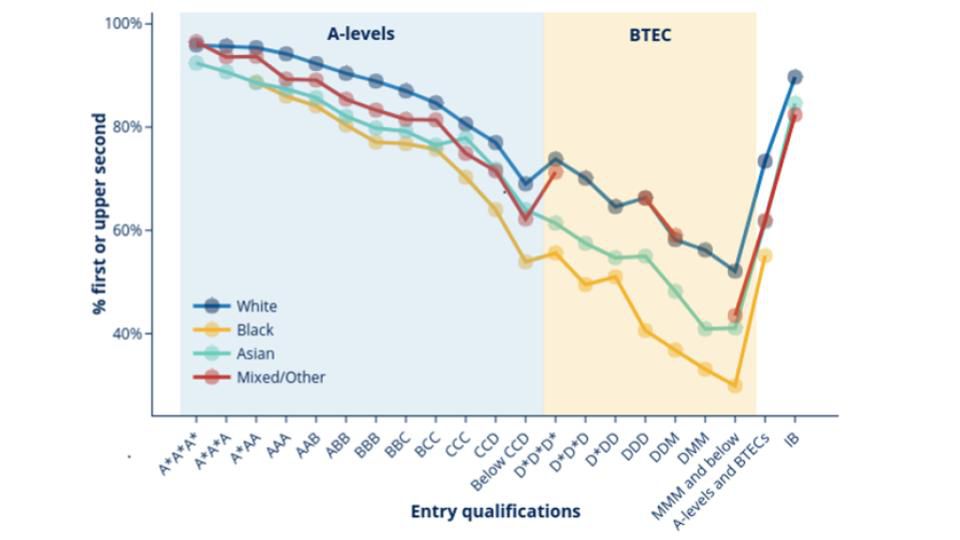 In this case, applying statistical analysis helps to clarify a clear association between race and the awarding gap. However, such research cannot confirm a causal link (for more on the difference between correlation and causation check out Dr Eliza Kozman’s valuable lecture from our conference earlier in the year). This is similarly true when analysis that controls for confounding factors – say class or prior educational attainment – seems to minimise the equality gap between black and white people living in Britain.

There is one significant exception to the rule that there is little experimental or causal evidence on racial inequalities in the UK: CV studies. These have been conducted over 50 years, and involve sending employers CVs of equivalently qualified candidates but with different surnames. Such studies have consistently shown that people with African or Asian-sounding surnames have to send in more CVs to get an interview. These studies rule out the possibility that class or qualification explain differences in call backs for interview, and are evidence of racial discrimination in hiring in the UK.

As outlined here, TASO is seeking to fill this gap by evaluating whether curriculum interventions have an impact on the degree awarding gap outlined above. That gap is a focus for the Office for Students, and tackling it has become a priority for higher education providers around the country. While it is good to see activity aimed at addressing this gap, we need better evidence of whether those interventions work. By next Spring TASO will publish the outcomes of our findings, and hopefully improve our ability to effectively tackle this longstanding and persistent inequality. We have also recently joined a partnership to examine the issue of post-graduate completion among black and minority ethnic researchers, though this will not be completed until 2023.

TASO is committed to tackling racial (and other inequalities) in higher education. We believe that focusing on the evidence of what works is vital, but we are also aware that evidence alone doesn’t change policy or practice. One of the main reasons that awareness of race equality has risen in the past year or more is because of civil society and ordinary people organising around the issue of ‘Black Lives Matter’ following the murder of George Floyd in the United States. The evidence for racial inequalities is somewhat different in the UK, although similar trends are apparent. Black History Month is a good opportunity for us to reflect on our own history, and to commit to understanding what works to address racial inequalities in Britain.